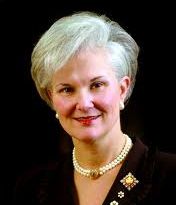 The Hon. Myra A. Freeman is the former Lieutenant Governor of Nova Scotia (2000-2006), a member of the Order of Canada, a recipient of the Meritorious Service Medal and the Order of Nova Scotia and the first Chancellor of the Order of Nova Scotia. A graduate of Dalhousie University, and former teacher with the Halifax Regional School Board, she is the recipient of six Honorary Doctorate Degrees, the Woman of Action Humanitarian Award from the Canadian Israel Research Foundation, and was recognized as a Trailblazer and one of Canada’s 100 Outstanding Women by the Richard Ivy School of Business and the Women’s Executive Network.

Since 2003 she has served as Honorary Captain (Navy) to Maritime Forces Atlantic, as Co-Chair of the Community Leadership Advisory Council to the Admiral for Maritime Forces Atlantic, as National Council Chair of the Canadian Naval Memorial Trust, and as a Director of the Canadian Forces Liaison Council. Mrs. Freeman is a national Director of Historica Canada, Save the Children Canada, the Duke of Edinburgh Awards, the International Women’s Forum of Canada, the Canadian Friends of the Israel Museum, the Frank H. Sobey Awards for Excellence in Business Studies, the Advisory Board of the Coady International Institute, the Board of Governors of Mount Saint Vincent University and Advisor on the Legacy Committee of the 2011 Halifax Canada Games. She is married to Lawrence Freeman, QC, a partner in McInnesCooper and is the proud mother of three children and two grandchildren.